There are a number of Proto-Sumerian text. These text are usually found on seals that depict Sumerian Gods and writing. Lets examine the seal below. The Sumerians originally lived in Middle Africa. When they went to Mesopotamia they took the Saharan writing with them. Using the Vai script to learn the phonetic value of the Proto-Sumerian signs, you can read the inscriptions in the Sumerian language. 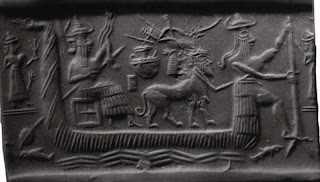 Let's read the seal above written in the Proto-Sumerian symbols. The V and small "t'signs are read Mi Mesh "Praise the diviner". Connected to this sign are three additional symbols a half moon sign, with a line in the middle, that goes below the half circle and turns into a pyramid placed just above the human headed feline.
Beginning with the line above the half moon we read : i a pa "The [Diviner] the leader to capture the watercourse".The diviner is probably the figure setting on the box sign with a small "t" inside. The box with a small "t" inside reads bu mesh "The perfect Diviner".
On the Diviner's arm we see three wavy lines above the arm on the rudder. These wavy lines can be interpreted as the word zi "the breath of life".At the rear of the boat we see a figure holding one sign in his hands and another sign is near the bottom of his robe. The sign in his hand is called ta 'entrust', the line on his robe is a compound sign tu la "make the luxurious libation".
The seal would read from left to right as follows:" Entrust [the Diviner] to make the luxurious libation. The breath of life is the Perfect Diviner. Praise the Diviner. [He is] the leader [who will] subdue the watercourse". 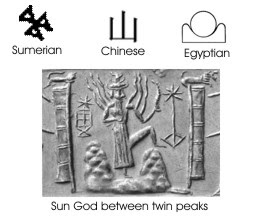 Here is another interesting Sumerian seal. On this seal we see the Sun God between two peaks.
Paul Menansala has observered in relation to this figure the following:"The Sun God stands between the peaks of Mt. Mashu, located at the end of the earth to the East and through which the sun rises from the underworld."
Let's see what the inscription says. On the arms of the Sun god we see three wavy lines on each arm. The wavy lines mean zi There are Proto-Sumerian signs before the figure and behide the figure. In front of the Sun God we have the following: i ta mi "Emerge Deity to open [here] a phenomenal area of your power". Behind the figure we read the following: Mash pu gal "The Deity's perfect Diviner is great".

Above we have a very interesting Sumerian/ Akkadian seal. Some researchers claim the "cuneiform" inscription reads Adda the dubsar or scribe.The figures with pointed hats represent gods. Among the Mades and Mande the pointed hat represented a priest.
The figure with streams of water with fish flowing from his shoulder is Enki, god of the subterranean water. Enki protects the law and gives rulers their intelligence and craftsman abilities. Enki's leg is bear and probably represents leadership. Behind Enki is the two-faced vizier Usimu.
Next is Ishtar, she has wings and weapons placed on them. In front of Ishtar, between two peaks is the Sun god cutting his way through the mountain; from his shoulder we see three wavy lines emanating from it which represents zi 'the breath of life'. The god with a bow may represent Nuska the hunting god.Over the lion we find a box with a Sumerian inscription. In the right panel we see a capital 't' placed a top a triangle. The triangle represents the sign me which has a number of meanings including: divine law, oracle, universal law.
In the panel on the right we read from top to bottom me du; me ta pa and under these signs boot shaped sign with four lines on top tu dar lu . This panel reads: "Make the Me. Entrust the me (to this ) person to make the perfect libation".In the left panel we read from top to bottomni bu-tu. gi bu , "(In) Respect make the perfect libation. Act justly ( in its) distribution".
This discussion of Proto-Saharan writing systems make it clear that various ancient people in Sumer, the Saharan region and Egypt used a syllabic script. The inscriptions they left appear to have served talisman or amulet. . They were carved to illustrate the devotion of these people to their gods and goddess and are a great testimony to the great civilizations built by the Proto-Saharans.
Posted by Dr. Clyde Winters at 11:09 AM

Peace be With You.

Heya, I visited your page again :) Very interesting. I have now found a clear connection between hallucinogens and early idolatry. But there seems also to be a clear monotheism originally. That really is EA, Zi, Ptah, Ra, Amun, Yah, Ia, Iao, Yahwe, and so forth, up until Allah.


So early idoletrous art, like venus-figurines, and later more complex things like these, (strange imagergy) is really symbolic art.

For an example of how to read that art: http://paradoxuncreated.com/Blog/wordpress/?p=5127

Peace Be With You.